Another Side of Worship in Bali

Posted on May 12, 2010 by jspencerphotography 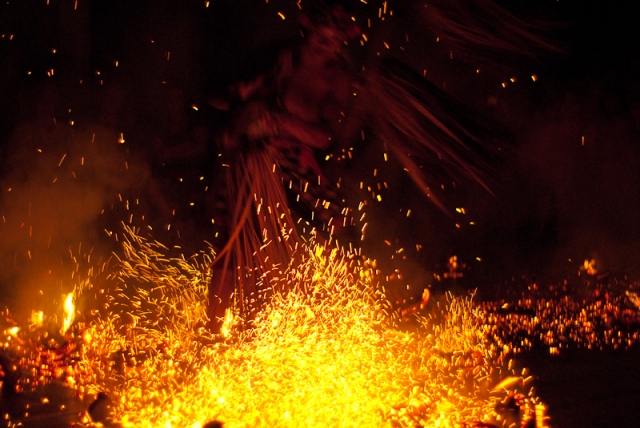 You know, I complain about the frustration of having a town sort of shut due to religion, but then I see something like I saw tonight and it leaves me speechless. I have never seen anything ever like this performance. I know they do the dance performance for tourists three times per week, but I still cannot believe what I saw will ever happen again. It was utterly unique, shocking and defied what I had believed were the limits of human endurance of pain. Maybe tonight was special, being the eve of Galugnan, the time when the ancestors come down from heaven and walk among us. I know it wasn’t anything I ever expected.
I saw the Sanghyang Jaran, or Horse Deity, trance dance.

According to my guide book, a dancer or dancers are put into a trance state by a combination of priestly chants and protective mantras. It is traditionally only done when a village or a people have suffered terribly from illness or bad fortune, and the idea is that the Gods themselves are invited to descend into the temple, inhabit a human medium and exorcise the evil or sickness-inducing spirits from the land [paraphrasing the Rough Guide to Bali].

Starting off the horse dance tonight, a very large sack of coconut shells was brought in, dumped into a stack, and some kind of clear liquid fire accelerant was applied and the stack was lit. The man lighting the stack continued to pour a liter of accelerant over the rest of the fuel until the fire burned so hot that I was uncomfortable from 20 feet away. A barefoot dancer entered, with a hobby horse of bamboo rings, streamers and bells around him. He danced around the fire like a wild horse for a moment or so, and then, much to my surprise, he danced into the fire and kicked the burning shells all over the floor, making a sort of carpet of burning shells. He danced with bare feet on this red hot fire, spreading it and kicking it up, and then a couple of guys with rakes gracefully moved around him and regrouped the coconut shells into a pile again, and the whole dance effectively started again but with less preamble. This man without shoes walked onto this fire again and again, kicked it and moved it and moved himself like a man possessed, as perhaps he was, for at least five minutes, possibly as long as ten minutes. Finally, other men got hold of him and wrestled him, as though breaking the man free of the deity, and carried him to rest. He was sat upon the floor and the priest came with water, but only to annoint his head. And there he sat with blackened feet and ankles as the evening came to an end, blessing and caressing everyone who spoke to him as though he had been given a great gift. His demeanor after the performance humbled me.

Before, in Cambodia, Morocco and other places, I have listened to the men tell me about the faith healers and the witch doctors and the magic men that they know. I know they believe in it, but I never did. Not until tonight.

This entry was posted in East Asia, Round the World Journey. Bookmark the permalink.