Posted on June 1, 2010 by jspencerphotography

I hired a driver for the day. First stop: the Zoo and the HMI: Himalayan Mountaineering Institute, located on the same piece of land.

The zoo was small, but pretty neat. I saw a Royal Bengal Tiger from a few meters away, and he stared right at me for a few seconds. There is something about being considered by a predator that is unmistakable. He was beautiful, though, and had blue eyes. I saw a snow leopard, a black panther, a cloud leopard and a couple of “regular” leopards too. Photo opportunities weren’t great due to the cages, so you won’t see a lot of images from the zoo. They had a few beautiful birds too, including one called the “dafne”, a type of pheasant (and I have no photo because he was behind curved plexiglass).

The HMI was really cool. No, that’s not short for “Helioseismic Magnetic Imager” (my last job), but Himalayan Mountaineering Institute, where they teach people how to become mountaineers. Tensing Norgay Sherpa is a local hero for all he has done, and his ashes are here at the HMI, with a statue dedicated by his friend and fellow mountaineer, Mr. Hillary. They made the first successful summit climb of Mount Everest together in 1953. I had to skip breakfast because I was running late so I bought at ear of maize from a lady roasting them directly in hot coals and ate it while haggling for some Darjeeling cinnamon bark. From there, we got a cup of tea from a bunch of local tea shacks on the side of the hill of the tea plantation. I was persuaded to buy some more tea (I bought a bunch yesterday) because it smelled quite good – yeah, I am a sucker.

Then it was on to the Tibetan Refugee Center. There were many quotes around from the Dalai Lama and also an explanation of the Buddhist chant “Om Mani Padme Hung”. There was a small museum there as well. I learned that the Dalai Lama was forced to flee Tibet (which I knew) and that an estimated 85,000 refugees came with him (which I did not know). Refugees are still risking their lives to cross the Himalaya out of Tibet into India. India initially put the people in the south, in refugee camps, but the heat and disease there killed many people who were already exhausted and malnourished from the trek. Before too long, in 1959, many were relocated to the North, and to the refugee center. The climate was closer to their own, though disease still took a big toll. There were orphans among the refugees, and many of those kids stayed at the center, working the rug-weaving looms and making the traditional handicrafts of the Tibetan people. These items are all for sale at the center, and the profits go directly to helping the government in exile and the refugee center, as I understand it. The museum explained what has happened in Tibet, why so many people are fleeing even today, and how much nuclear power has been created there by China, wiping out the lush grasslands, the unique bird and other wildlife, and a religious tradition of centuries. Apparently the world’s richest deposits of uranium are found in Tibet, not to mention now a large dump of depleted uranium (nuclear waste). It is very sad what has happened, and really it appears to be entirely due to greed. Even children have been taken prisoner. One wonders whether there would be anything left to go back to if the Chinese were to leave. One also wonders how different this is from the US expansion into the West, into Native American lands.

After that bracing visit, we got back in the car and happened to go past a “training rock” for the HMI. If you pay a little, the mountain climbers will ferry you up the rock. Yikes! I stayed on the ground. We went out of Darjeeling into the next town, named Ghoom (or Ghum, if you prefer), home of the railroad museum for the “toy train” of Darjeeling. Until very recently, this was the highest elevation train in the world (2438 meters at Ghoom), and one of the few steam trains still actively working. It was built in 1881 and is now a world heritage site. It is called a toy train because it is so small: the track guage is 0.6 meters. The tracks are just over a foot apart from each other, and the engine is the size of my car, but a bit taller. They had the original restored 1881 engine out on tracks at the museum, directly beside the Ghoom train station. The tracks run directly through town, and the people have built right up to the literal edge of the train. You could be at a shop and have to dodge out of the way, it’s so close. But that is how everything is in Darjeeling and so far, all these mountain towns: no sidewalks of any kind. There is zero setback from the street. Pedestrian activity is a compromise between walkers and drivers. Everyone eventually gets where they are going, but cars pass you sometimes within 3-4 inches (no exaggeration). The train appears to have the same rules. Near Ghoom is the Yiga Choeling Monastery, established in 1850 and the oldest in the area, belonging to the Yellow Sect.

It was at the monastery, as I was putting my shoes back on, that my camera fell. The lens cap is irreversibly stuck in the UV-filter I had protecting the lens, but thank goodness I had the filter on because my lens was not damaged. I’ll need a new lens cap, but for the time being, I can keep putting the fused filter/cap combo on and off, I guess. Maybe in Dehli there will be a camera shop that has an extra cap. And speaking of my shoes, as I was taking them off at the next monastery, the Japanese temple of Peace, I realized that the left shoe has come completely apart from the sole. Uh oh. I bought these shoes on my first trip to Italy 12 years ago and have had them faithfully repaired and resoled ever since. They have been on just about every trip with me and have trod through the worst filth and weather, always coming through looking at least decent. I sure hope there’s a good cobbler in Dehli. People repair things here, though, so maybe I’ll be able to have them fixed competently. We’ve been through too much together to give up on them now.

Between Ghoom and the Japanese Temple of Peace was Lloyd’s Botanical Gardens. Mr. Lloyd founded Darjeeling, so a lot of things are named after him. The garden had an orchid house and a big glass conservatory. I saw a red orchid I had never seen before, looking like a small calla lily in form. The conservatory had closed by the time I got there, unfortunately, but it smelled wonderful from where I stood. I was really getting tired, but we had one more place to go. The Temple of Peace was finished in 1992 and stands (I think) 26 meters high. It’s on a hillside, like everything here, and has a lovely view of the mountains. It was built by a disciple of the Lotus or Peace sect of Buddhism who was inspired by the bombing of Hiroshima and Nagasaki to build a lasting monument for peace. The sandstone carvings are very good, and the golden Buddhas are visible from quite far off.

Finally, I got back to the hotel, got some laundry back, and headed out again for dinner. Tonight, after looking unsuccessfully for a new lens cap, I ate Tibetan flat noodle soup and momos. It was good. It’s the first time I have eaten in town in Darjeeling (on my last night here) because the first night I was too tired and the second night was Buddha’s Birthday, a night when most places are closed. It was probably 70 degrees or so outside, with a light crisp breeze, and the Indian tourists all had earmuffs on! They were cold! Heh. I guess I won’t be laughing in a couple days when I am roasting in 115 degree heat, though.

Tomorrow, on to Kurseong. Wish me luck. 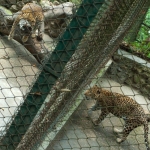 Buddha at the temple of Peace

This entry was posted in Far Far Away, India, Round the World Journey. Bookmark the permalink.