In Our Nation’s Capitol

Posted on April 19, 2012 by jspencerphotography

This week’s adventure finds our heroine in Washington DC. Tickets: check; ID: check; suitcase: check. I am getting the hang of this! I left early from San Jose in hopes of not losing the whole day flying, but I was so sleepy I am not sure it was a good choice. I managed to get to Ronald Reagan airport by 4 PM. Unfortunately, my airport ride got caught in a huge traffic snarl and I had to find my own way into town before I met my friend, co-worker and, most recently, client Joe for dinner.

Joe’s been very patiently waiting for a bunch of photo-negative restoration work on his family’s images, and it was time to make a large delivery. After a little time on the computer, we headed to Jaleo restaurant and enjoyed a nice long evening of chit-chat and Spanish food. We even tried tripe, which had heretofore been on my “I dunno about that…” list of foods. Hm. It’s still on that list. Since our reservation was at 9:00, I was late getting back to my hotel and getting to bed. The next day started with decaf tea (arg…). I ended up at the Starbucks across the way just to get some kind wake-up juice in my system and from there I hiked over to the Washington Mall. No, no – not for shopping, for walking and seeing. I went past the Smithsonian castle, their main information center, and experienced the usual thing that happens to a photographer carrying a large camera: someone else with a large camera asked me to take a photo of him and his wife. I asked him to return the favor and got my own picture taken. We large-camera people stick together. Maybe we all dread having to explain why we are carrying such a behemoth instead of using our phones.

From there it was a leisurely walk up the mall to the National Botanical Garden (next post!), and then to Capitol Hill and its lovely dogwood trees. As I was looking at the capitol building, my cousin Sandra sent me a message telling me she’d be in DC on Saturday (yay!) and asked if we could get together. I was so excited to see Sandra since it had been four years since the last time. After that, I went on to the Library of Congress. I’ve always wanted to see our national library, really ever since I began going to the local library as a child. The thought of endless amounts of books, some of the more than 500 years old, seems like a pirate’s treasure. Our national library is the largest in the world, in both shelf space and assets, with over 147 million items. No matter what else you want to say about the United States, we did that right. The original building is gorgeous, too.

By this time, I was beginning to get pretty tired (the caffeine wore off), but I still had some time and I wanted to see the Annie Leibovitz photography exhibit at the National Portrait Gallery. It was a collection of her tours of the US and England with her family, and showed things such as the exhibits in Darwin’s house and the homes and ateliers of other famous persons. Personally, I found it rather derivative. I mean, it was a portrait of an experience and what those places meant to her, but still, I felt like I was on the outside trying to look through something opaque. The best photo in the exhibit was her lovely image of Niagara Falls. It was taken, I believe, exactly where I was standing a few weeks ago in Ontario. Mine was nowhere near as good. I went to see what else the gallery had to offer for as long as I could keep going, and I found a great portrait by John Singer Sargent of Elizabeth Winthrop Chandler. So powerful and touching, at least to me. She was my kind of person, this lady. I wandered further and saw some nice portraits by Childe Hassam, whom I have always liked, and then I ran out of steam. The building is laid out in large hallways with many rooms off each side. The rooms have large, plush ottomans, and there wasn’t anyone around, so I laid down for a few minutes and the next thing you know I’d sort of drifted off. Oh dear. I heard a guard come in and I got back up, feeling embarrassed. He asked if I was enjoying myself and I said “well, yes, very much – but I just got so tired.” He said “as long as you are enjoying yourself, carry on.” Hah! What a nice man. I decided that if I was that tired, it was time to go back to the hotel and have a big nap. Which I did.

After a hard time waking up, I tried something new called a “pop up” restaurant. Apparently it will only be open for six months. This was called “America Eats” and was run by the same chef that owns Jaleo where I’d eaten the night before. Hm. This guy is the hot ticket in DC, I guess. After that meal, I can see why. It was sublime. So good. Oysters on the half shell, hush puppies as light as air, delicious salad and the weirdest good key lime pie ever: deconstructed. There were piles of graham cracker crust, dollops of egg meringue and a ribbon of key-lime custard along with some key lime foam. Mmmm…

The next day brought a trip to the Jefferson memorial and the Holocaust Memorial museum. I don’t think I have mentioned that this day was also the celebration of the Cherry Blossom Festival and the 100 year anniversary of the gift of cherry trees from Japan to the US. Due to an unseasonably warm winter and early spring, there really weren’t any cherry blossoms left. They’re headed straight to cherries now. I looked high and low for days but so far the only thing close were pink dogwood trees. Lovely, but it’s not the same thing. Finally, though, on a little island in the road on the way to the Jefferson Memorial, I found one tree that still had a few blossoms left. I took it as a good sign and took photographs. From there, I went on to the Memorial, where the Army, Navy, Marines and the Air Force were preparing to have a drill competition in about an hour. While that would have been cool to watch, I had a schedule to keep. I read the words of Thomas Jefferson and as always, found them touching and inspirational. He was a democrat, and a man much after my own heart; wishing for an end to tyranny and the freedom for all to pursue their dreams.

Speaking of tyranny, I went next to the Holocaust Memorial museum. It doesn’t seem to have a cohesive layout as many other museums do, but if you take the time to go through the exhibits slowly, you get a very personal sense of what it might have been like to have everything, both the tangible and the intangible, taken away in the name of a madman, slowly over a long period of years. It is impressive how clearly the museum manages to illustrate such difficult ideas and to articulate such feelings. I was sad and moved upon leaving. The thing that frightened me the most was the way that intellectual, rational arguments were completely unimportant to a populace exhausted from a financial depression and the loss of a war. The emotional appeal of a dictator who promised to save them from their fears was a draw that the majority could not ignore.

That evening I saw my dear cousin Sandra for a drink and some catching up after years apart, and we had a wonderful time. I am so glad she contacted me! After that, it was, ironically, yet another (!) José Andrés restaurant: Zaytinya. The Turkish/Greek/Lebanese food was very tasty and the restaurant provided some excellent people watching. The woman next to me wore a black lace dress up to the tops of her thighs, “those shoes”, what appeared to be a wig, and enough makeup for a kabuki play. When she began to speak she sounded about age 18, but she looked somewhere in her late 30s from all the paint. And she was there with a boy of maybe 20. At first I thought maybe she was a “rental” until she began to speak and was clearly far too innocent for that. This was just one of the entertainments of the evening. The food was good, but it was hard to hear anything over the din and all the dishes came in a big rush. It was the sort of atmosphere that you just want to hurry up and leave once you’ve gotten enough to eat. Which is exactly what I did. Unfortunately, I made the stupid mistake of walking in my high heels to find a place for a nice quiet after-dinner drink. I am now sitting here with blisters on my feet the size of nickels.

The next day, it was time to go home. After (finally) enough sleep and a leisurely brunch, I had a ride through Mount Vernon and back to the airport. But not before stopping in Alexandria for some foot bandages (oh thank goodness for those). Then it was on the plane again, just me and Delta Airlines. On the way home, the plane had to go around a big storm system and I could see some of it out the window. I have never seen lightning from a side-angle before – wow. A wonderful finish for a wonderful trip.

Inside the Jefferson Memorial

Columns of the Jefferson Memorial

A beautiful day in Washington DC – the Jefferson Memorial

Part of the Capitol building

A quote at the Holocaust Museum

Me, near Mt. Vernon

Another view of the Library of Congress

The last cherry blossoms in DC! 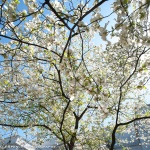 Capitol Hill, and the Capitol.

Ceiling at the Library of Congress

Main gallery of the Library of Congress

This entry was posted in North America. Bookmark the permalink.