Off-Roading in a Honda Accord?

Posted on January 20, 2014 by jspencerphotography

When I first got to Guam, I reveled in the high speed internet, the working telephone, the ability to rinse off all the soap and the shampoo in the shower, the clean linens and the A/C that smelled only very slightly of mildew. It was such a treat. I almost didn’t know what to do with myself. Fortunately, all that changed when I finally got out of that oh-so-comfortable bed and rented a car.

I mentioned earlier that you could go out to Ritidian point. It apparently has a beautiful and mainly deserted beach, but it was one that I was unable to reach. Not for lack of trying, just lack of information. The public access gate closed at 4 PM, but I did not know that until I got back; instead I drove around a lot and was confused. You see, the reason that the beach is deserted is because it involves some off-road driving to get there. Did you know you could off-road in a rented Honda Accord? You can!

I first turned onto the road marked “Ritidian Unit” and wondered if I was in the right place. My map study before leaving the hotel indicated that this was the correct location. There were no 4g smartphone Google maps available here so I had to think for myself – uh oh. I had the right spot, but since there were markers every 100 yards informing me that it was a US Air Force base requiring visitors to have permission from the commanding officer, I got a little worried. I did not have permission. I certainly had not spoken with anyone in command. I’d have remembered that. Now what? Well, I turned around and read the sign again and it said also that the Preserve was this way too, and I also noticed a couple of locals on their way back out. So, maybe it’s not a shooting offense to be driving there? My welcome was confirmed when I passed a security vehicle with American GIs in it who returned my wave and smile. Okay – whew – uh oh – that pothole is as big as my tire!! The road was terrible. There were car-eating potholes and they were so close together as to be impossible to avoid. Before long, a dirt track started by the side of the road. I thought it over, looked at the broken pieces of pavement sure to do damage to the wheels and maybe the fenders, and moved over to the red dirt road instead.

It was slow going, but safer, and the car was fine. This continued on for miles to a lookout point that had an amazing view followed by an amazing decent down the road. Fortunately, the steep part had decent paving. When I got to the bottom of the road, I could choose from two paths at a fork. The one path was gated and closed (this was the public access road, I later realized) and the other was open. I took the open path. I say path because at this point the road was mostly gone. I kept driving, carefully and slowly. Eventually after another two miles or so, every path and every clearing was marked “No Trespassing” and “Private Land” or “Private Road”. There was no hope. Nothing for it but to turn around, I guess. That was easier said than done since by now the road was one lane, surrounded by jungle trees, and narrow, but I managed it in a clearing. Me and the Honda worked our slow way back up to the lookout, took some pictures, and then re-navigated the red-dirt road out to the highway. Sigh. In a situation like this, sometimes you just have to accept defeat. So much for those sunset pictures on the beach I was hoping for. Ah well. I decided to indulge myself and go have a manicure at the Micronesia Mall. I am disappointed about missing the beach, but I am still happy I gave it a try.

My rental car with the local flora 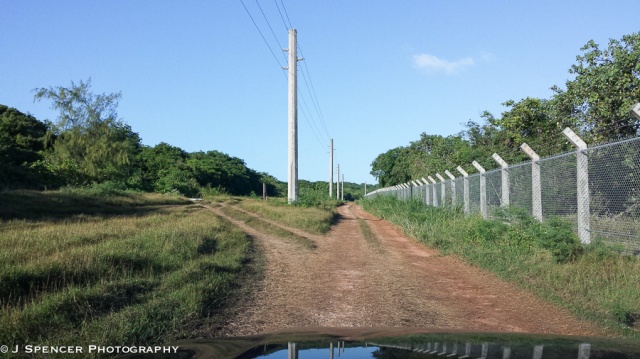 The red dirt road at Ritidian Point, aka Andersen Air Force Base

The narrow dirt road at the end of the jungle

This is the beach – this is as close as I got to viewing it, despite being on the road pictured. 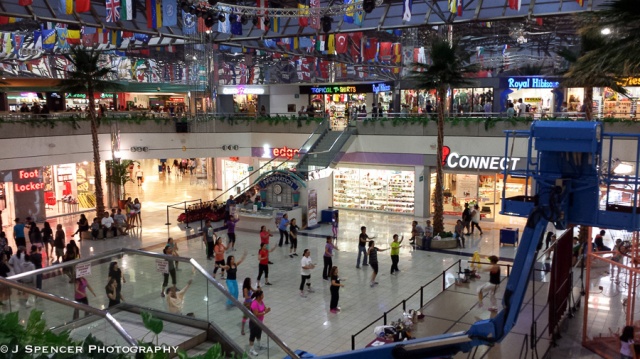