Posted on January 20, 2014 by jspencerphotography

What a relief. After a week of mildew, mosquitoes and nearly no communications, I am in the land of high-speed Internet, regular cell phone reception, nice linens, clean water and safe food (as long as you don’t count irradiated fish in the Pacific). I’d have been happy to go back to Kosrae but since there were no flights in that direction for a few days, I got a chance to learn about Guam. The people here are helpful, nice, and have a great sense of humor. I like Guam quite a bit, although I understand living here is less easy than visiting. The tourism is a bit of an eye-opener too.

The Westin hotel was where I stayed: a 21-story building on Gun Beach, and not cheap, with a high-decibel megaphone intrusion from the carnival up the street. Yeah you read that right, a carnival. Turns out that Guam is an inexpensive destination for a lot of Japanese tourists. It’s sort of their Acapulco. Young Japanese women were dressed like $5 streetwalkers in the elevators with their boyfriends, and all kinds of…. interesting(?) businesses were nearby to cater to the men who had arrived without ladies of their own. It is crudely said that Japanese men come here for the two G’s: gonorrhea and guns. Guessing from the businesses around the Westin, there’s something to that idea, unfortunately. There were lots of “gentlemen’s clubs” and massage parlors surrounding my hotel, complete with burly guys trying to get lone male pedestrians to become customers. There were also at least two gun ranges within 100 yards. In Japan, it is not possible a regular person to own a firearm, I understand, so I guess it’s a bit of a thrill to try one out abroad. All these sin businesses surrounding the outer hotel grounds made me a bit uncomfortable. Mostly because I had to walk past them at night alone and feel those hawkers (pimps?) watch me go past. I looked back with hostility and undisguised contempt. Once I’d walked past that section of the strip, however, I found a whole other kind of disturbing landscape: a shopping mecca. Normally this wouldn’t bother me at all, in fact I might even like it, but this particular place was different. I want to call it an opium den, but that’s not strictly accurate. There was a DFS Galleria, the original, I believe, with a two-story Hermes shop along with any other designer you can think of (Prada, Chanel, Burberry – the list goes on and on). Don’t even get me started on the jewelry and watch shops (Piaget, Breitling, Cartier). There were special shuttle buses that picked up and dropped off from the hotels. The shopping complex was huge, and I am only listing what I could see from the outside. And, get this, these exclusive, normally quite snobby shops, were open until 11 pm. Seriously! There were ladies all over the beachfront drive with very fancy shopping bags. I guess the female Japanese tourists are in Guam for the D & G, not the G & G. Maybe if I’d had $50,000 to blow, I’d have been pretty happy about this scene, but since I didn’t, it just seemed excessive.

Fortunately, Guam has the sense to keep all of this activity penned up in one place: Gun Beach. There really isn’t any of this folderol anywhere else. So, what happens when you get out of Gun Beach? Plenty! If you rent a car, in a couple of hours you can see the whole island. You can go down to Pika’s café, or to Proa restaurant, you can drive to the northernmost point of the island (Ritidian Point through Andersen Air Force Base), or go all the way along the east coast, past Guam University, down to the southernmost point of the island, Umatac. I wanted to head to Umatac and thanks to the kind advice from my waiter at Pika’s, I took the prettiest route to get there. People are so nice here! Umatac is where Magellan landed on Guam, starving and miserable. He was fed and cared for. But he got his skiff taken from him in exchange for the food, water and succor he received and, in what I can only hope was a terrible misunderstanding, he declared the islanders evil thieves and proceeded to burn their village and kill the people who’d helped him. Magellan renamed the island “Isla de los Ladrones” (island of thieves). Later the Spanish came back here and built an outpost as part of their Manilla/Acapulco trade route. I guess “don’t feed the explorers” is the lesson from that story. But the Guamanians are so non-confrontational that it sort of figures that they’d have some trouble with pesky colonials as a result. I understand from some US Navy folks stationed here that all of this kindness and gentleness doesn’t translate to everything working perfectly. I also heard that recent crime includes gangs of big local guys beating the daylights out of soldiers who are out in numbers. Like, put in Intensive Care, beatings. I am thinking those guys might not be Guamanians. They might be from a rougher island. But no one knows. I was lucky not to run into anything like this.

The southern part of Guam, near Umatac, is regarded as the last of the real “Guam” Guam, and it’s pretty pastoral. I liked it. The road along the eastern coast is mainly small villages, one after another, getting down to cows, water buffalo and tractors in the road as you go further south. The little kids wave at you if you wave, and everyone smiles. There were some funny signs and sayings along the way: “Keep Calm and Pray the Rosary”, “I Pity the Fool who Litters in my Village” and finally, “Aspire 2 Inspire B 4 U Expire”. I was grinning all the way through the drive. I even stopped at Guam University and picked up some frangipani blossoms to put on the dashboard (good air fresheners).

A few miles down from Gun Beach, and between a big military base and the tourist area is a pretty state memorial park for the War of the Pacific. Near the park is a little museum with some local history about World War II. I learned a few things. Guam has been a US Territory since the Spanish American war in 1898. The Guamanian people have suffered a lot from various invaders over the years, starting with the Spanish, and the WWII Japanese were scary occupiers who committed many atrocities on this island. Their commander was in fact tried and executed by the US on Guam for war crimes. After the island was finally liberated by the US Marines, the locals were only too happy to go out and hunt down the Japanese resistance on the island. For non-confrontational people, this is pretty serious. Also, I learned that the Guamanian people kept symbols of the US (e.g. our flag) hidden in hopes that we would return, though if the Japanese had found these things, the owners would have been killed for having them. Guamanian life under Japanese occupation was pretty bad. You can read more about that here if you’re interested.

What I found amazing was the fact that some individual Japanese soldiers, once they were driven back into the jungle during the US retaking of the island, dug themselves in rather than suffer the humiliation of surrender or defeat. They lived off the land for a very long time. A couple of men were found in 1962, and another in 1972 (!) living in deep caves that were cleverly excavated and well covered up. That’s 28 years after the US liberation of Guam. Twenty eight years living in the jungle alone – I cannot imagine. The last man was captured while fishing one night, was in remarkably good health and had known about the other two guys found ten years prior. In good Guam fashion, the men who captured him did not hurt him and treated him well until he could be turned over to US authorities. He was honored by Japan and the US for his dedication to his duty and his code of ethics. But Japan knew there were men like him all over the Pacific. In fact, after the war, Japanese citizens worried about those who followed the Bushido code and had dug in. Ordinary citizens would visit Guam, and leave copies of the Japanese daily newspapers and the nation’s flag in plastic packets in the jungles. They were trying to make sure the hidden soldiers knew that the war was over and Japan was changed. It is unclear whether they were believed. The Bushido code is impressive. Recently in the news, such a soldier hidden in the Philippines died at the age of 91. He was found in 1974 and refused to surrender until his former commanding officer came from civilian life to relieve him.

After a long afternoon of education and exploring, it was time for dinner. I wanted to try pokey while I was in the island, which is basically tuna salad but with raw tuna. Even though I know the fish is at risk given its proximity to the continuously leaking Japanese nuclear reactor, I made an exception. I asked where to get the best in town and the ladies at the Westin front desk pointed me to the marina and the fisherman’s coop. I managed to find the place and for a mere $5, got the pokey, stopped at the Japanese restaurant in the hotel and got $3 worth of rice, went upstairs and had myself a delicious dinner. For me, Guam was that kind of place – good advice, good hospitality, and a comfy hotel. Although it’s not perfect; I still had to watch out for the pimps. 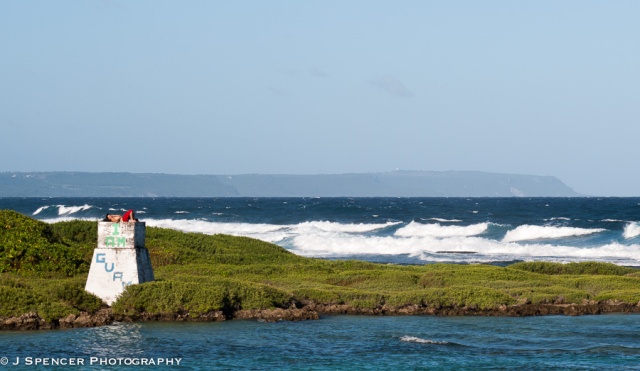 On the east side of the island 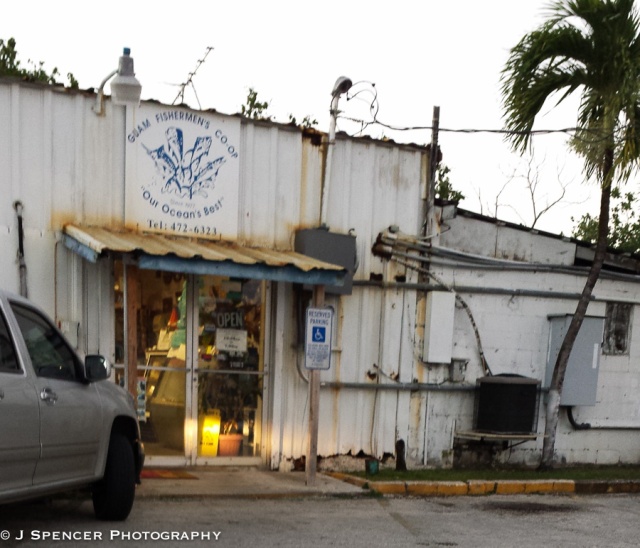 The fisherman’s coop. Blurred because I was trying shoot discretely. 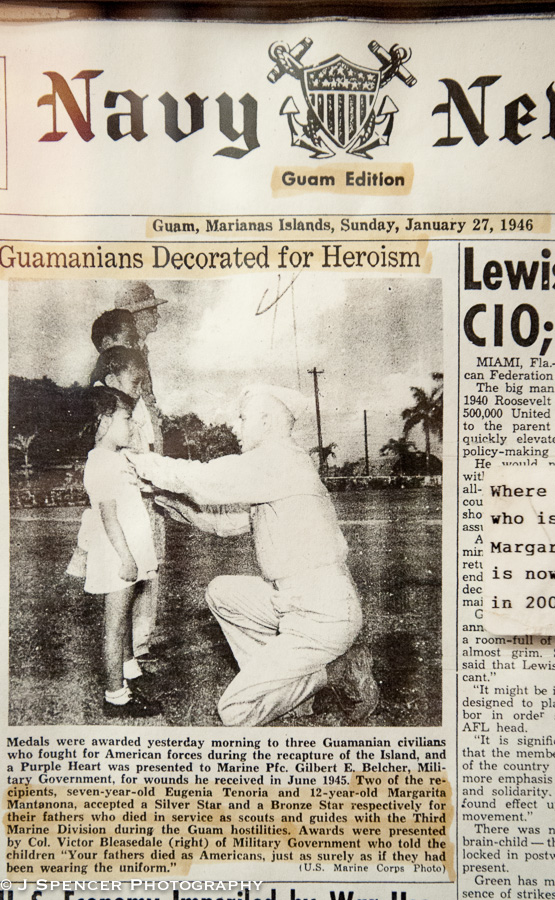 A moving article at the war museum 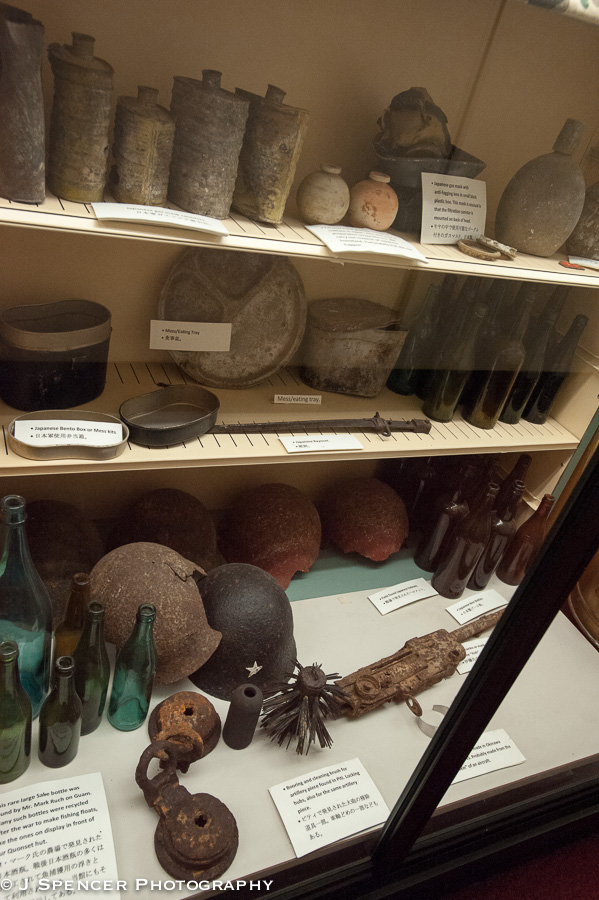 Japanese memorabilia at the war museum 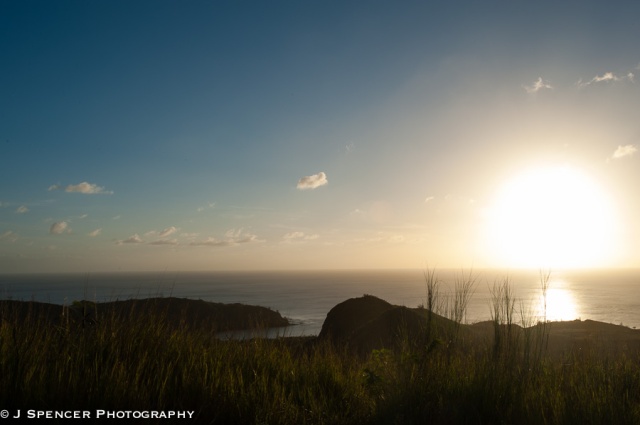 Sunset on the southwestern side of Guam 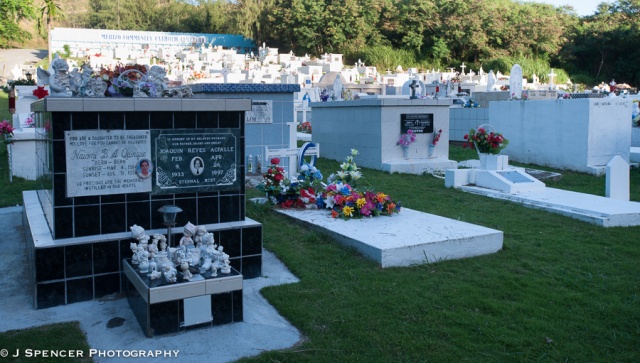 The local Catholic cemetery near Umatac 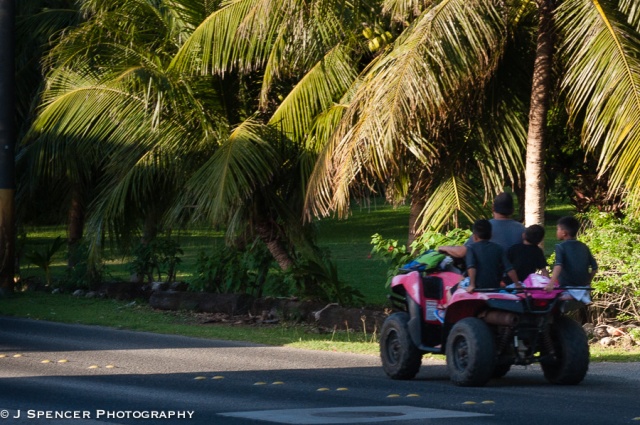 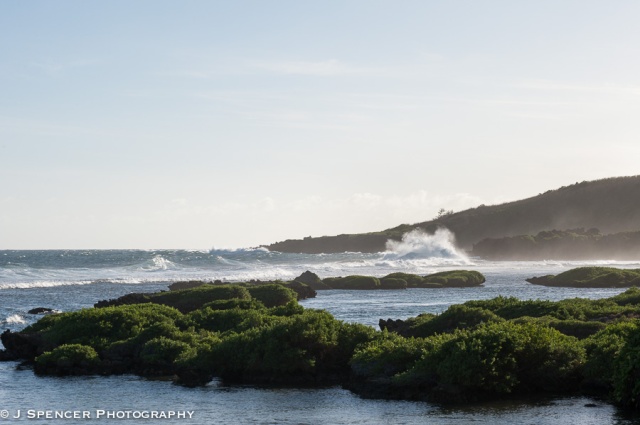 The southern part of Guam 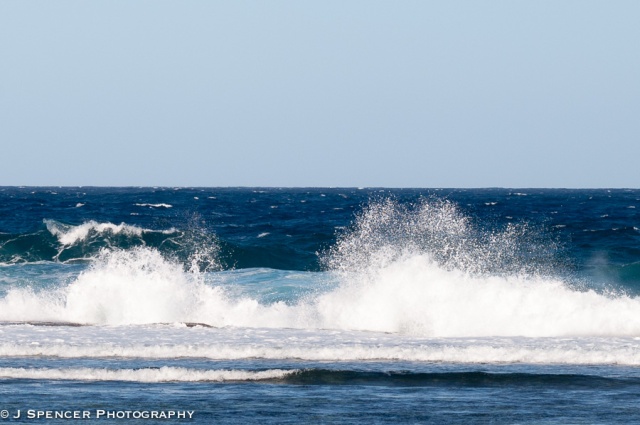 The Pacific near the southeast coast of Guam 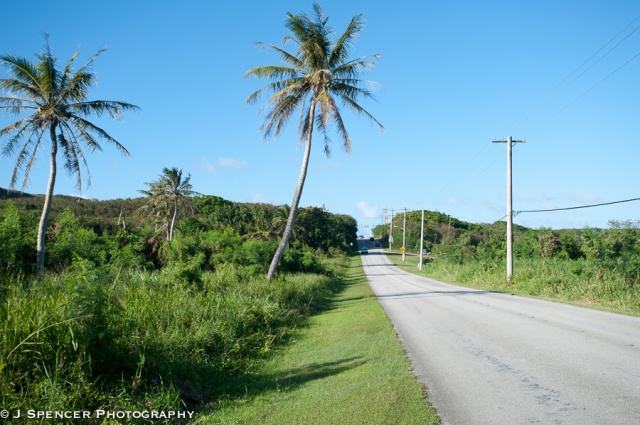 The main road through the island 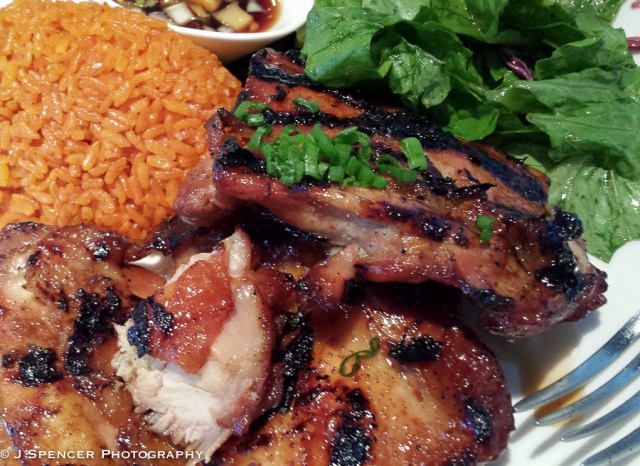 Lunch at Proa – the BBQ’d chicken was delicious! 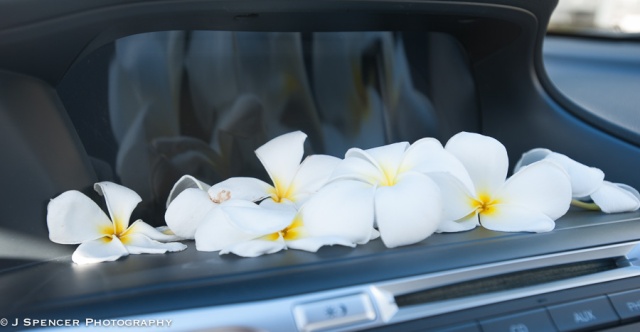 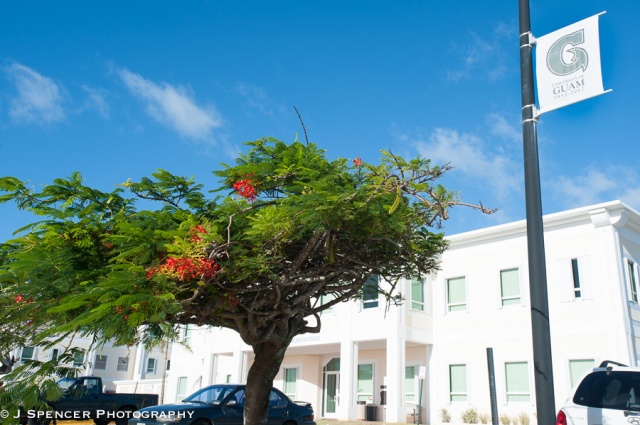 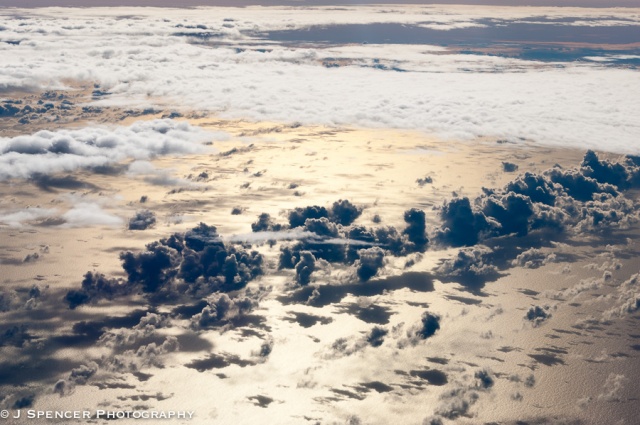 The view on approaching Guam island 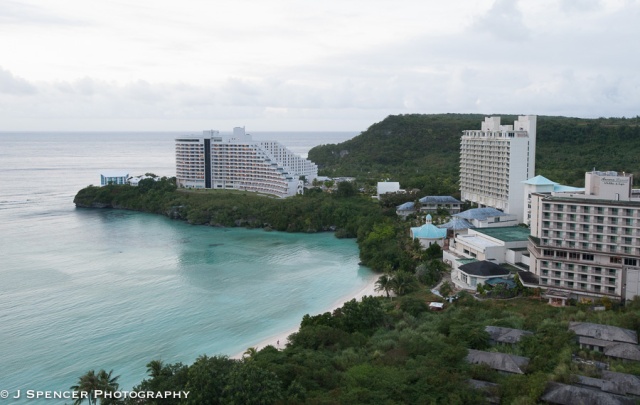 View from the Westin