Posted on July 16, 2014 by jspencerphotography

I didn’t know what to expect. Would Melbourne be like big cities everywhere? Would it be dusty, like an outpost? Would it be like San Francisco since it had a big sheltered bay? Or would it be something from an English town-planning book? I had some time to think about it: my plane was delayed. Instead of moving forward in my adventure, I wandered the Cairns airport, ate scones and cream in the coffee shop, ransacked the airport gift shops, and wrote a couple of dozen postcards. I spoke with some returning Aussie tourists and we had a laugh about their experiences in the Pacific Northwest (they asked “just how many times can you say ‘authentic’ before it doesn’t mean anything?”).

Finally, though, the plane boarded and I went to Melbourne.

I was greeted on arrival by a Kashmiri taxi driver. He was, it turned out, a typical Melbourne denizen, learning computer networking at university in his off hours and about to graduate. There were tons of young people in the city, some on holiday and others working and studying there. Most of them, it seemed, were immigrants and it reminded me of San Francisco. Another thing that reminded me of San Francisco were the foodies! Melbourne is known for its restaurants. The city is expanding, and prosperous. I think the city bird may be the construction crane. Everywhere I turned, I could see another building going up and another set of orange cones directing me away from a rubbly sidewalk. According to those in the know, the city has changed a lot in the last 20 years. It was once more of a place that was small, cozy, waiting for news from “home” (England) and the population was mostly Irish/British-ancestry, and Italian and Greek immigrants. Now there are people here from all over the world, and it’s a garden of steel and glass skyscrapers. It’s got its own firm identity and pride of place.

First things first though – forget all this tourist musing – I’m hungry. And restaurant standards are high in this town, a fact I’d been keenly anticipating. Where to eat, then?

I’d been told to try the Victoria Market. The market was open late since it was a Wednesday, and all the market food stalls would be serving dinner. Many of them had favorable write-ups online and in my tourism book. Great – let’s go. Well, actually, hang on a minute. Seems everyone else has the same idea on a Wednesday night. I was in no way prepared for the crowds. It was completely overwhelming, and impossible to know what food would be good since there were long, serious lines at every stall. Did I mention that there seemed to be an uncounted number of eateries in this place, too? The market buildings just went on and on and the crowds with them. It seemed like the entire city plus a few extra busloads of people had all landed there at once, too. It was a polite mad house, Australia being a Commonwealth country, but a madhouse all the same. I decided to go on back to the hotel and get a recommendation for a quieter spot. I ended up sitting at the bar in an Asian Fusion joint (aka “Mod Oz”) that had amazing food. I had to dress up for dinner, because that’s how it is in the nicer parts of town, but it was worth it. My first intro to Melbourne food was a win for the home team!

The cuisine only improved as the week went on. They have this great thing in Melbourne: the chocolate shop. It’s a place that only serves desserts and coffees. They’ve got the usual ice creams, sorbets, milkshakes and the like but also chocolate in many forms – usually fantastic gourmet-level chocolates. When I went, I got churros made to order with chocolate dipping sauce. Oh, yum. I don’t know who thought of this business idea, but it’s taken off, and I’m grateful. I had wonderful Italian food, too, but mostly, Mod Oz was the thing on the menu. It’s very healthy, good for those watching their carbs and increasing their veg and seafood intake, and it’s all over town. They also have special drinks, in particular non-alcoholic “waters” of the day that are a fruit-infused water, or sometimes a blended frappe sort of thing with only fruit and herbs. These drinks are wonderful, especially when it’s hot out. I consumed several different types here and later in Adelaide, where it gets very hot and dry in summer. Really, the best part was how difficult it was to get food that was not well made or not good for you – everything was the best that you could ask for and you wouldn’t feel overly indulgent or sorry afterward. We Americans could learn something.

As an added attraction, my fine Melbourne hotel was beautiful. It was the first time I’d been anywhere with a real concierge and capable facilities since Honolulu and it was a pleasure. I took advantage of it: shipping all my rented camera gear back to Los Angeles through their service, getting my shoes repaired by a good cobbler (people care about their shoes here!) and getting good restaurant recommendations. The view from the room was pretty nice too.

Still, I didn’t spend all my time in the city. I rented a car (gasp!!). Yes, that’s right, I drove in Australia and no one was harmed. Not even a koala bear. I braved the “other” side of the road and the infamous Melbourne “hook turn”. I’ve nicknamed it a tram turn, but they call it a hook. It’s where you turn from the most outside lane across all lanes of traffic in the opposite direction; this is only done at the last moment of your traffic light, and it’s rather dramatic. Feels weird to do it, but it sort of makes sense given the fact that there may be a tram coming in the center of the road, and you cannot sit on its tracks waiting to make your unprotected turn – ergo, the “tram turn” or the “hook turn”. Here’s a little video of the procedure, so you can get the gist: https://www.youtube.com/watch?v=Oofmv1gep1I

The freeway was easier driving than in town, and I must say all of Australia was easier driving than the logging routes of Malaysia or the little towns and roundabouts of Malta. Along the way, I noticed art sculpture along the roadside. What a great country. Still, I don’t think I’m ready for driving in London yet, despite the practice. I gamely drove an hour or so down to the end of the land for a look at the ocean and a coastal supper. Several people had recommended this route and I thought I ought to try it – let me tell you they were right. I visited the town of Portsea, overlooking the Bass Strait and Tasman Sea, then I went back north for a lovely dinner in the aptly-named town of Sorrento.

Melbourne was full of surprises. I would never have dared to guess it would be as special as it truly is. Australia has magic. In Portsea, in a place as close to the end of the earth as I had ever come, I saw what was perhaps the most beautiful sunset I’ve ever watched. The sun was a golden ball turning everything around it pink and orange, and the strong cold surf crashing on the long sandy beach was this white and aqua color with the calmer water behind the breakers reflecting the orange and pink sky. I couldn’t stop looking at it. Believe it or not, I didn’t want to photograph it. It felt intensely private, religious perhaps, and somehow, I needed to keep it to myself. I’m telling you about it only so you will know to go there if you’re in Melbourne someday: it’s beautiful enough to bring you to tears if you slow down and watch.

The view from my hotel room shortly after sunrise. Count the cranes! 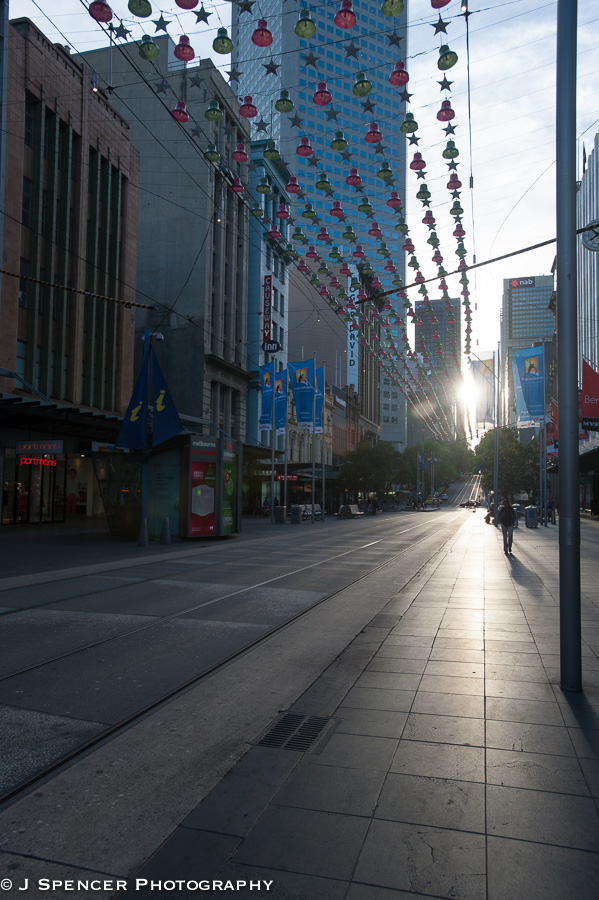 New year’s decorations in the streets of Melbourne. 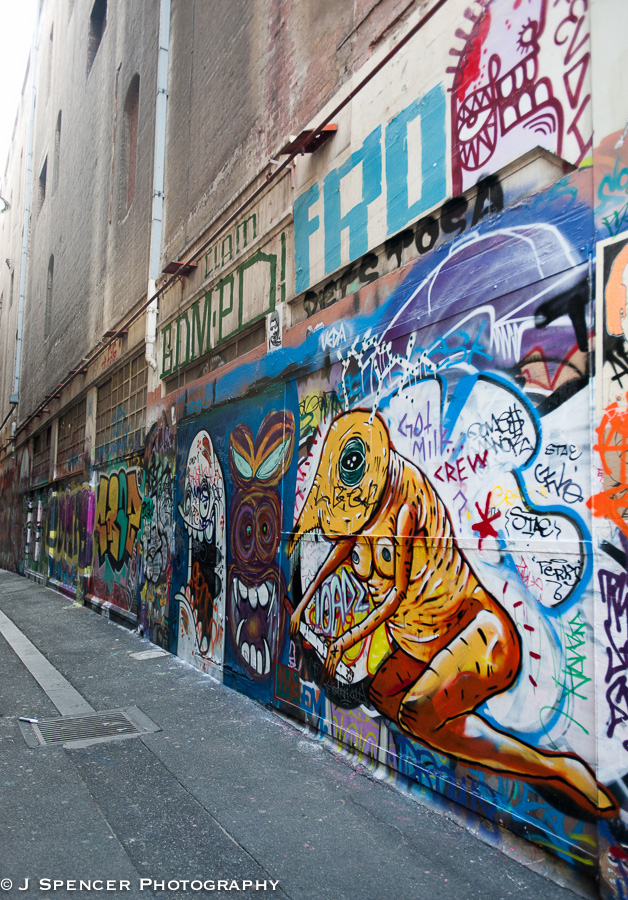 The city is also famous for its graffiti. The artists ran when they saw me. 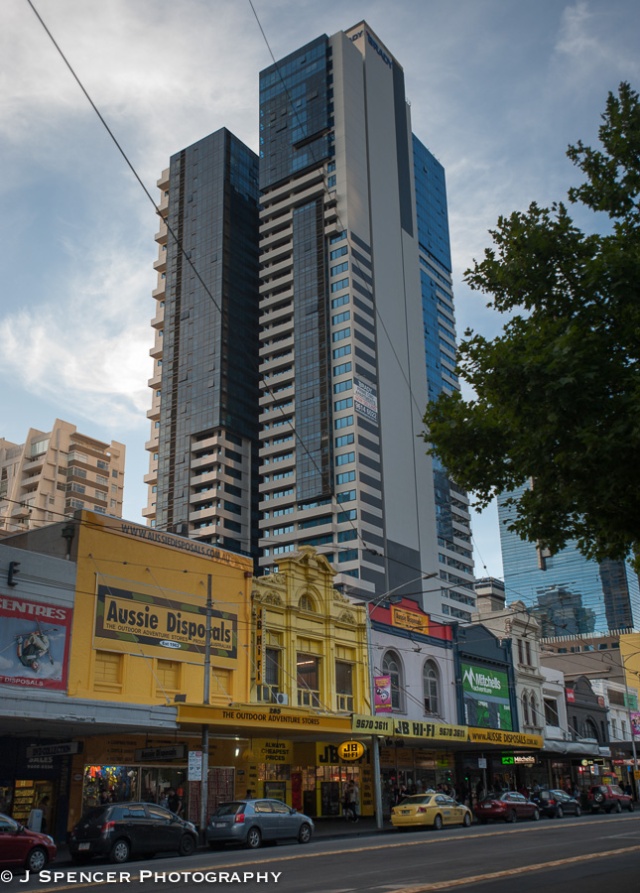 The Melbourne streetscape that was, in front, and the new, in back. 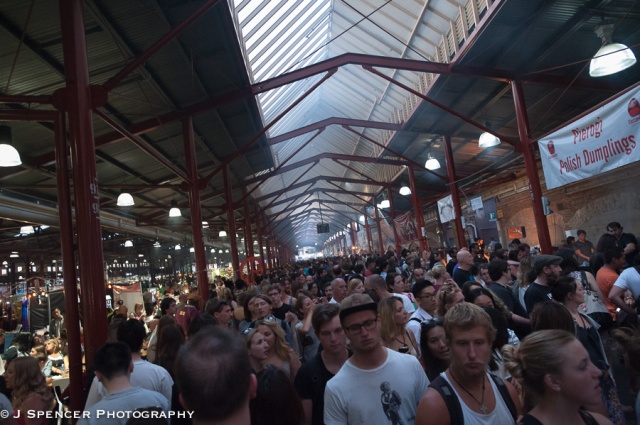 This entry was posted in Australia, Uncategorized. Bookmark the permalink.

1 Response to Melbourne: The Melting Pot